Top ratings go to Raw Honey, Chicory Root, Lo Han Guo, and Swerve Sweetener, the best and healthiest Paleo sweeteners. The criterion used are based on purity, stable blood sugar, and balanced metabolism. With a growing epidemic of diabetes and obesity, we need to find sweeteners that will stop the sugar cycle in it’s tracks. Some of these sweeteners are expensive, but still far less costly than diabetes. In some areas we need to hunt and gather them online. This article is a brief executive summary. For details see my researched articles: What are the Best Paleo Sweeteners?, and 300 Sweeteners, Which is Best?

1. Raw honey is the best Paleo sweetener.
Yes, raw unprocessed honey is a true Paleo sweetener. Honey is the food eaten by the young bees, and it’s a superfood for humans too. Regarded as a sacred food for centuries, honey is also a remedy for many health ailments. Our Paleolithic ancestors were willing to take the risk of gathering it from beehives seasonally. But wait a minute – not every day! Honey is very high in carbs and calories, and it gives a nice big blood sugar spike. It contains about 50% fructose, 44% glucose, and 1% sucrose, which is surprisingly close to table sugar (see chart at bottom of page). For these reasons I reserve honey as a rare Paleo treat, and use it infrequently. Since honey is almost twice as sweet as sugar, use 1/2 to 2/3 of the amount of sugar called for in a conventional recipe.

2. Chicory Root Fiber
There aren’t many brands of chicory root sweetener out there. Just Like Sugar Table Top is a natural chicory root sweetener that can be measured cup for cup like sugar. With zero-calories and zero-carbs, it does not affect blood sugar or insulin response. It gently sweetens everything without a sugar spike, or a drop soon after. There are three varieties of Just Like Sugar: 1) Table Top 2) Brown and 3) Baking. The Table Top version gives the best flavor and texture in baked goods. The Brown version has an additional ingredient of concentrated steam from molasses, which is dehydrated to create a brown sugar flavor that’s healthy and non-glycemic—an amazing invention! I use both Table Top and Brown varieties. The Brown has a rather strong flavor, so I like to mix them half Table Top, and half Brown. I do not recommend the Baking version, as it has a higher fiber content, is measured by weight, costs more per sweetness, and cannot be used cup for cup like sugar. Just Like Sugar, both Table Top and Brown, can be found at vitacost.com or justlikesugar.com. It is expensive, but not as expensive as diabetes.

What are the ingredients in Just Like Sugar?
Just Like Sugar is made from crystal chicory root that is 96% dietary fiber, mixed with calcium, vitamin C, and pure orange peel. Chicory root fiber is high in fructo-oligosaccharides, which taste sweet but do not affect blood sugar or cause weight gain. A natural pre-biotic, chicory root inulin helps to promote healthy intestinal flora. By itself, chicory root is about 30% as sweet as sugar. It becomes as sweet as sugar with the addition of powdered orange peel, a highly concentrated sweetener that is six hundred times sweeter than sugar. Just Like Sugar, both Table Top and Brown, can be found at vitacost.com or justlikesugar.com.

3. Lo Han Guo
PureLo Lo Han Sweetener by Swanson is made from luo han guo, a sweet Chinese herb. It was raised by monks for centuries, so it is often called “monk fruit”.  After much research, I have not found a reliable source for 100% lo han guo. I trust PureLo by Swanson Vitamins, which is mixed with inulin powder and is approximately six times sweeter than sugar. It has a gratifying sweet flavor and no aftertaste. Even better, it has zero carbs, zero calories, and contains no sugars. Find PureLo online at swansonvitamins.com or amazon.com. Use 1/6 the amount of sugar called for in a conventional recipe.

4. Swerve Sweetener is a blend of erythritol, a naturally occurring fermented sweetener. Swerve is my favorite brand of erythritol because, unlike other brands, it is made from non-GMO vegetables and fruits. It has zero calories and does not affect blood sugar. Swerve sweetener works well in most baked goods. I find it does not always dissolve completely when chilled. It is used cup for cup like sugar. What’s your favorite Paleo sweetener?
Experiment to find the sweetener that works for you. There’s no sweetener that’s right for everyone. Sugars are definitely not Paleo. And as a general rule, sugar is a metabolic scrambler in the body – sooner or later there’s a price to pay in your health. Since I can’t eat sugars of any kind, my body is a kind of litmus test for sweets. However it is possible to substitute any sweetener in my recipes, knowing that it may change the nutrition and carb profile.

Sweeteners I don’t recommend:
I don’t recommend maple syrup, coconut sugar, or agave nectar, as they aren’t truly Paleo. They’re boiled down to concentrate them and make them super-sweet. This makes them very high in fructose sugar, which carries the same health risks as high fructose corn syrup. I do not use xylitol because it has 70% the carbs and calories of table sugar, it raises blood sugar, causes gastric distress, and is toxic to dogs. I do not use refined stevia powders or liquids, as they’re highly processed with chemicals.

Take a look at the chart below for a comparison of carbs in sweeteners. For more details, see my researched articles: What are the Best Paleo Sweeteners?, and 300 Sweeteners, Which is Best? 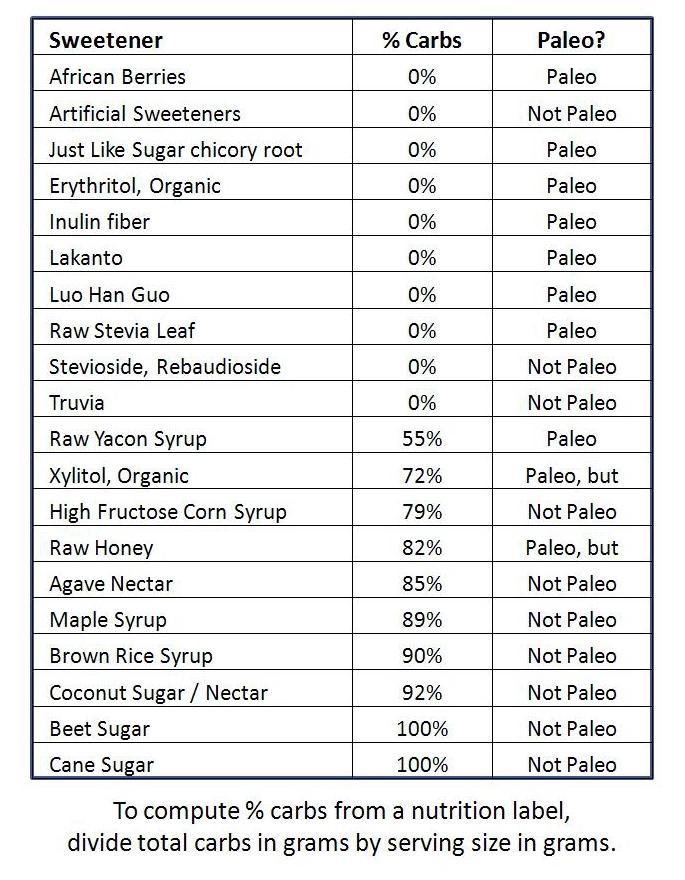 More than 150 easy favorites to start your day, gluten and grain-free